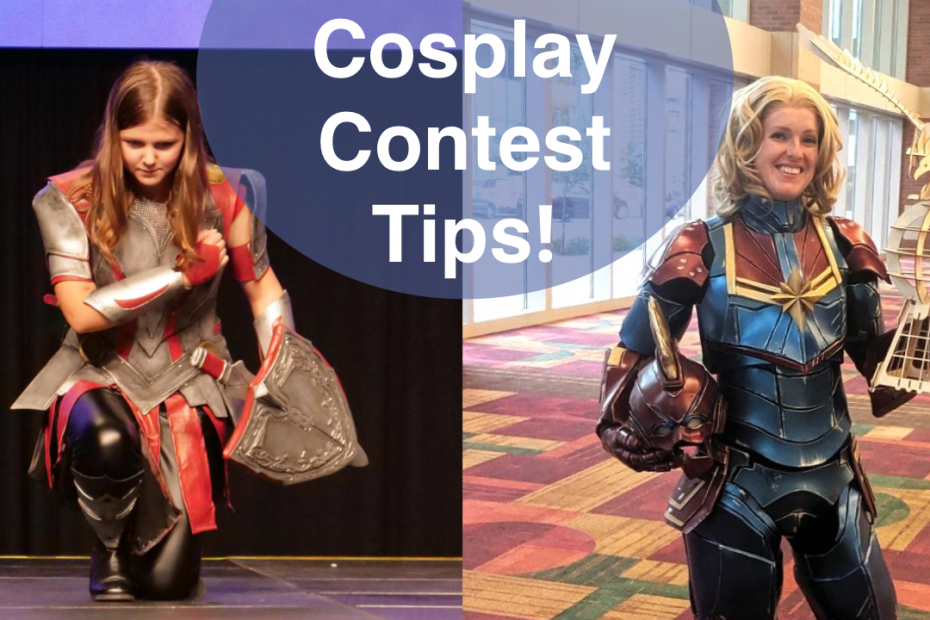 For a lot of cosplayers, the thought of competing in a cosplay contest can bring both excitement and nervousness. It may seem like a super cool thing to do, but what if you mess up? What if you have no idea what to do?

Not to worry! In this blog post, we’ll cover everything you need to know about entering your first ever cosplay competition. All the way from picking a competition cosplay, to preparing beforehand, to what to do afterwards!

Today I’m joined by Maker Fishmeal, a very skilled craftsman and cosplayer, who has entered, placed in, and won many different cosplay contests over the years! Here’s a bit of an introduction from her!

Fishmeal: “Hi! My name is Maker Fishmeal. I say I specialize in foamsmithing and large props, but recently I’ve been trying to learn… all the rest of the making aspects of cosplay! I love cosplaying from video games, comics, Disney – whatever strikes my inspiration. My goal with every costume is to learn something new and to turn that knowledge into guides for the community through tutorials and work-in-progress explanations. When I’m not cosplaying, my favorite hobbies are reading, video gaming, and walking.”

Fishmeal has made a ton of different guides and tutorials that she shares freely with the cosplay community, and it’s awesome to have her input today!

So, with the special guest of the day introduced, let’s get into talking about cosplay contests!

There are a ton of different types of cosplay contests, in all sorts of different settings. Some might be online, where you simply submit a single photo to judges. Others might be on stage at a convention, with prejudging, and an extensive on-stage portion. I’ve competed in both, and both can be a lot of fun!

For a more casual online cosplay contest, all you might have to do is submit a photo of your cosplay to the judges, along with your’s and the character’s names, and sometimes a reference photo.

For a more serious online contest, you might need to make a build book, which chronicles the entire process of creating your cosplay. It includes WIP pictures, descriptions of how you made different pieces, and all the details you don’t want the judges to miss! You may also be asked to submit a short video showcasing your cosplay.

Even though they’re just through the internet, online cosplay contests can still be a lot of fun!

Although, along with online contests, there are the in-person ones, held at comic conventions! Where you talk to judges in person about your costume, and go on stage to show it off in front of a crowd! These kinds are some of my favorites.

Now that we’ve talked a bit about the basics of cosplay contests, it’s time to move on to one of the first steps for your cosplay contest journey! Picking a character and costume to recreate.

Fishmeal: “I take choosing a competition piece very seriously and think it’s a huge part of a successful contest – and for that reason, I have a whole guide for it! Tl;dr is that a potential contest piece is achievable, has a wow factor, is highly detailed, has special techniques, and is personally exciting! If it doesn’t have pretty much all of those aspects, I won’t commit to it as a BIG PROJECT.”

Pick something that is impressive and challenging, with lots of little details, but is also within your skill range.

Once you’ve picked your cosplay, you need to make sure that it’s even allowed in the contest! Will you have time to make it? Is it too big to be allowed on stage? The find out the answers to these important questions, READ THE RULES!

Read them all the way through, several times if you have to! You don’t want to miss any important little details. How sad would it be to be disqualified on a technicality? To avoid this, just make sure you read the rules, and follow them!

Once you’ve completed your cosplay, and the date of the contest is drawing near, it’s time to seriously start preparing for the judging!

You need to make sure your cosplay will hold together well throughout the contest, and everything looks good! Maker Fishmeal has some awesome advice for this.

Fishmeal: “To prepare for a contest, I really recommend that you complete it early enough to have a photoshoot. This is your test run for the contest, and you can use the resulting photos in your build book! Also, do a big look-over before you leave for the con to correct any small mistakes or repairs.”

I’ve definitely had costumes fall apart during photoshoots, and it’s much better that they fall apart THEN than during the contest! Treat your pre-con photoshoot as a sort of test run, to make sure everything looks good, and will work out the day of the con! If you need help finding a good location for your photoshoot, here’s a different post I have with advice on that!

In addition to preparing in other ways, it’s a good idea to think through what you want to say to the judges in pre-judging. You usually only have a short amount of time with them, and you want to impress them! Talk about the most impressive, or most difficult parts of the cosplay. DON’T talk about what you don’t like. If they don’t notice it, there’s no reason for them to know!

Fishmeal: “Do NOT say anything negative about your costume. You’ll want to – I have to resist the urge every time! Don’t point out your mistakes or your “wish I had”s. Even if the judges do see these things on their own, you don’t want to dwell on them or call attention to them.”

Instead, talk about the parts of the cosplay that you really like, that were difficult or complicated to make, or little details that they may not notice. You want to ‘wow’ the judges! Show off your work. Don’t be afraid to brag a little.

Most in-person conventions have an on-stage portion for their cosplay contests. Sometimes it’s just walking around the stage a few times, while other times it’s a carefully rehearsed, several-minute-long skit.

For whatever type of performance you’re doing, it’s always a good idea to practice beforehand. For my own performances, I listen to the soundtrack I’ve chosen over and over again, going through the motions of my performance. I’ve found that the more prepared I am, the less nervous I am.

Fishmeal: “To prepare for the stage show, I really recommend that you have set poses that you can do without any thought at all. When I’m on stage my brain falls out of my head, so I have to rely on practice to look epic! This is another advantage of having a shoot before your contest – you’ll already know and have practiced your best poses.”

Performing on stage can be scary, but if you’re prepared and confident, it can be a lot of fun!

After the contest is over, there’s usually a short period of time (or even a long one) where the judges consider all the entries, and pick the winners.

Fishmeal: “If you win OR if you lose, my advice is basically the same: be gracious, thank the judges and the organizers, ask for feedback, and congratulate the winners! You are of course welcome to be excited and proud or upset and disappointed, but I encourage you to do it in private and (in both cases) learn from the experience.”

Cosplay contests can be a ton of fun, from creating your cosplay beforehand, to performing on stage. Even if you’re nervous, or don’t think you’ll win, I highly encourage you to try it anyway! It can be a great experience for you.

Hopefully, this helped give you a good idea of what to expect for your first ever cosplay contest! They are so much fun, and such an awesome experience.

Finally, I’d like to thank Maker Fishmeal for taking the time to share her advice and insights into cosplay contests! She’s an amazing cosplayer, and you should definitely go and check out her work.

I wish you all luck with any cosplay contest ventures you may have! You’ve got this.